Any paper proposal not accepted for the special session to which it is submitted will be included for consideration in the general pool. Should a special session not be accepted as a whole, the individual papers will be evaluated separately.

French Romanticists and the Orient – Orientalism (1978) and beyond

In a recent special issue of French studies, Jennifer Yee and Charles Forsdick argue that the “French nineteenth century was […] at the heart of postcolonial thinking from the outset.” Indeed, the works of French Romanticist authors, including Chateaubriand, Victor Hugo, Lamartine and Gérard de Nerval, are amongst the most important building blocks of Edward Said’s argument in his landmark study Orientalism (1978). This session invites proposals that investigate the legacy of Said’s readings of French Romanticism forty years on, as well as new perspectives for the study of French Romanticism in its broad relation to the ‘Orient’. Possible topics could include (but are not limited to):

Lord Byron Now and Then: A Special Session sponsored by The Byron Society

Proposals are invited for a special postgraduate/early career panel on any topic(s) relating the conference themes to the life and/or writing of Lord Byron. Thanks to generous support from the Byron Society, those whose proposals are accepted for this panel will each receive a £250 bursary to help cover travel, registration, or accommodation costs. For the purpose of this panel, we are defining ‘early career’ as within five years of receiving the PhD. Please send your 300-word paper abstract, including name, affiliation, and email address, to both  alan.rawes@manchester.ac.uk  and icrmcr2019@gmail.com by 15 January 2019.

Letters are widely encountered in Romantic studies: from oft-quoted passages by Blake and Keats that appear in their letters, to epistolary novels such as Frankenstein and Lady Susan. In recent years, digital humanities projects such as the Robert Southey Letters, the Keats Letters Project and the Blake Archive have made correspondence of Romantics more accessible to researchers. This panel seeks to address issues of methods and best practice in research in Romanticism that involves correspondence. Possible topics could include (but are not limited to): case studies focusing on corpora of correspondence relating a specific individual or organisation, including Digital Humanities projects; ethical issues involved in using correspondence in research; limitations of correspondence as a research tool; creative uses of correspondence (for instance, letters containing poems, epistolary novels, and creative reuses of correspondence). The panel aims to be an interdisciplinary forum for discussing issues relating to research that involves correspondence; as such, proposals are welcome from historians, art historians, linguists and others, as well as literary scholars.

Please send your 300-word paper abstract, including name, affiliation, and email address, to both naomi.billingsley@manchester.ac.uk and icrmcr2019@gmail.com by 15 January 2019.

Romanticism, People of Colour, and 1819

Proposals are invited for a special session on intersections of Romanticism, people of colour, and the events and texts of 1819. Possible topics could include (but are not limited to):

In honour of the bicentenary of Peterloo, the John Thelwall Society is sponsoring a panel exploring connections between the radicals of the 1790s and later generations of and movements for reform. This includes events and figures surrounding Peterloo, Chartism, and early twentieth-century suffrage movements, but we also encourage participants to explore connections between Romantic-era radicals and activists today, especially in light of the “generational change” that is a growing feature of political discourse at the current moment. Topics might include, but are not limited to

Papers need not be on John Thelwall, but his work offers a useful touchstone for the wide range of topics and approaches we encourage, and we would certainly welcome proposals exploring his work in relation to this topic, the conference topic and/or Manchester in general.

The Romantic period in Britain and Ireland was shaped by dynamic economic phenomena that informed the art and culture of the age. Such phenomena ranged from the structural forces driving the Industrial Revolution (c.1760-1840) to the results of specific government policies. During the period, the expansion of large-scale industry continued to shift power from agriculture and the landed aristocracy towards the manufacturing and financial classes. The 1797 Bank Restrictions Act prompted fresh evaluations of gold bullion and paper money. Britain’s military expenditure during the Napoleonic Wars (1803–15), and the resultant growth of the national debt, impelled fresh analysis of the aims and risks of public finance. Advances in technology, and the spectre of unemployment in the regional mills, spurred the machine breaking of the heroic Luddites (1811–16). The post-Waterloo recession (1815-19) incited fervid debate around alternative modes of production such as agrarianism and proto-socialism. And responses to the Peterloo Massacre (1819) stressed the economic conditions that provoked demands for reform, and the institutions remaining in the way.

The Romantic Economics session invites proposals that explore how romantic-period writers and artists from across the disciplines respond to such phenomena. Papers may wish to consider how specific writers engage with economic ideas: how Coleridge and Shelley apprehend economic phenomena through the lens of epistemology and moral philosophy; how Austen and Edgeworth explore the impact of commerce on individuals and communities; how Cobbett and Marcet clarify economic ideas for marginalised audiences; or how Malthus and Ricardo shaped the discussion of concepts such as value, exchange, labour, utility, growth, interest, debt, rent, and population.

The session aims to accommodate papers across such disciplines as art history, literary studies, philosophy, politics, and economics. In keeping with the overall conference theme, we particularly welcome papers that draw subtle links between Romantic-period economics and the ideas shaping debate in 2019, such as digital currencies, automation, A.I., sovereign debt crises, economics and gender, and growing socioeconomic inequalities. 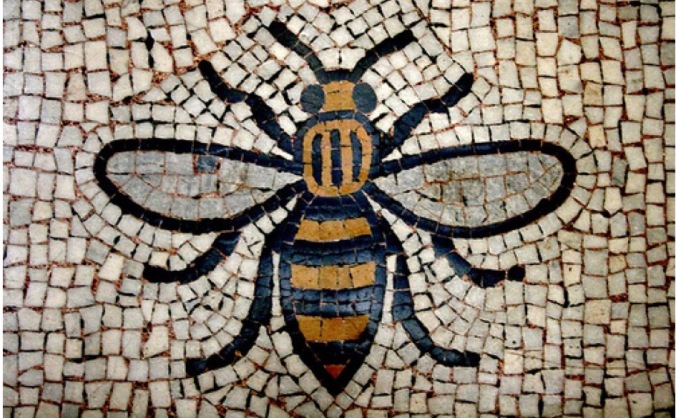 The worker bee has been a symbol for Manchester since the 19th century. The city is a hive of activity.